Below you will find instructions for some common use cases. 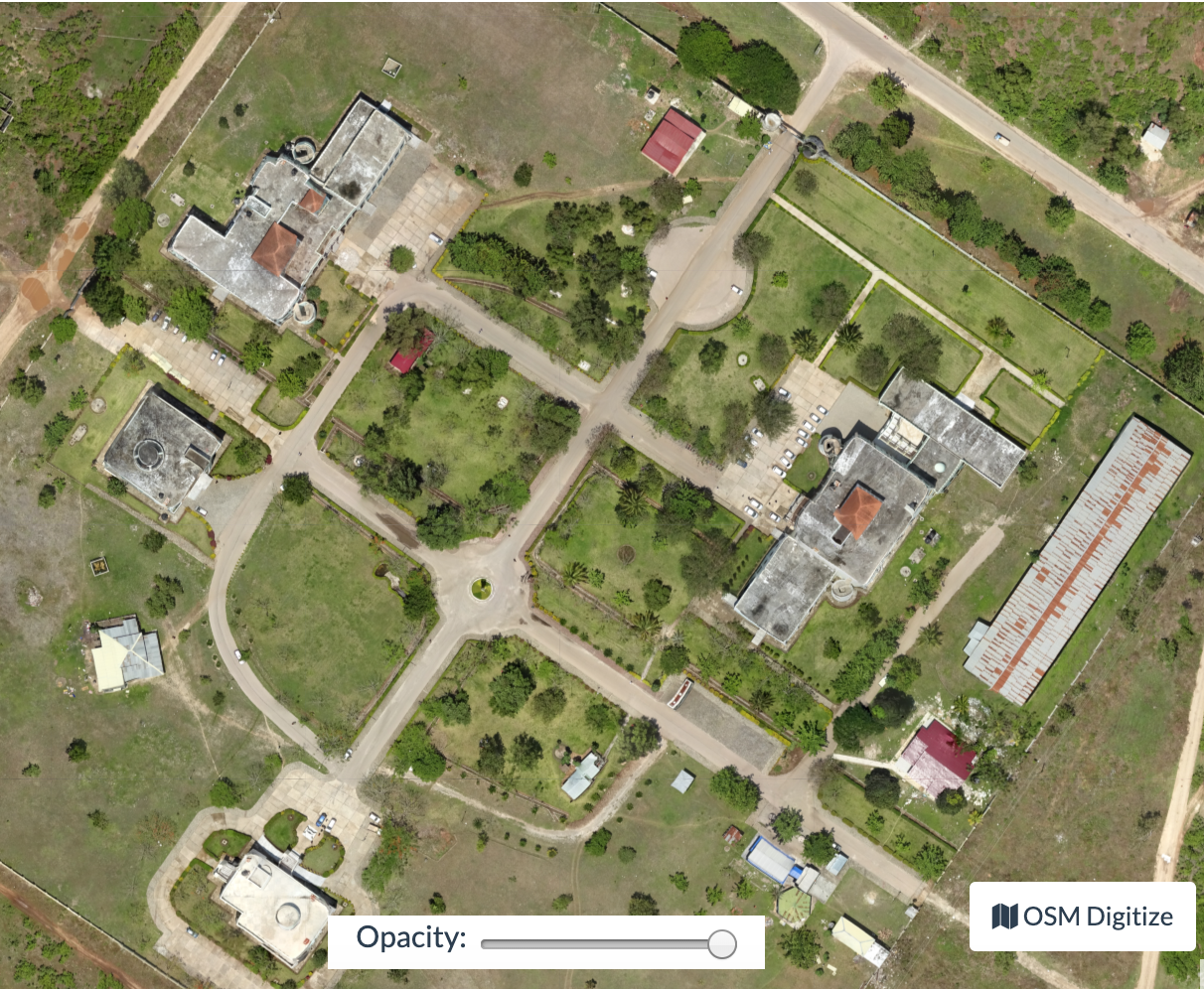 Without any parameter tweaks, ODM chooses a good compromise between quality, speed and memory usage. If you want to get higher quality results, you need to tweak some parameters:

Camera calibration is a special challenge with commodity cameras. Temperature changes, vibrations, focus, and other factors can affect the derived parameters with substantial effects on resulting data. Automatic or self calibration is possible and desirable with drone flights, but depending on the flight pattern, automatic calibration may not remove all distortion from the resulting products. James and Robson (2014) in their paper Mitigating systematic error in topographic models derived from UAV and ground‐based image networks address how to minimize the distortion from self-calibration.

To mitigate this effect, there are a few options but the simplest are as follows: fly two patterns separated by 20°, and rather than having a nadir (straight down pointing) camera, use one that tilts forward by 5°.

As this approach to flying can be take longer than typical flights, a pilot or team can fly a small area using the above approach. OpenDroneMap will generate a calibration file called cameras.json that then can be imported to be used to calibrate another flight that is more efficiently flown.

Alternatively, the following experimental method can be applied: fly with much lower overlap, but two crossgrid flights (sometimes called crosshatch) separated by 20° with a 5° forward facing camera.

Vertically separated flight lines also improve accuracy, but less so than a camera that is forward facing by 5°. 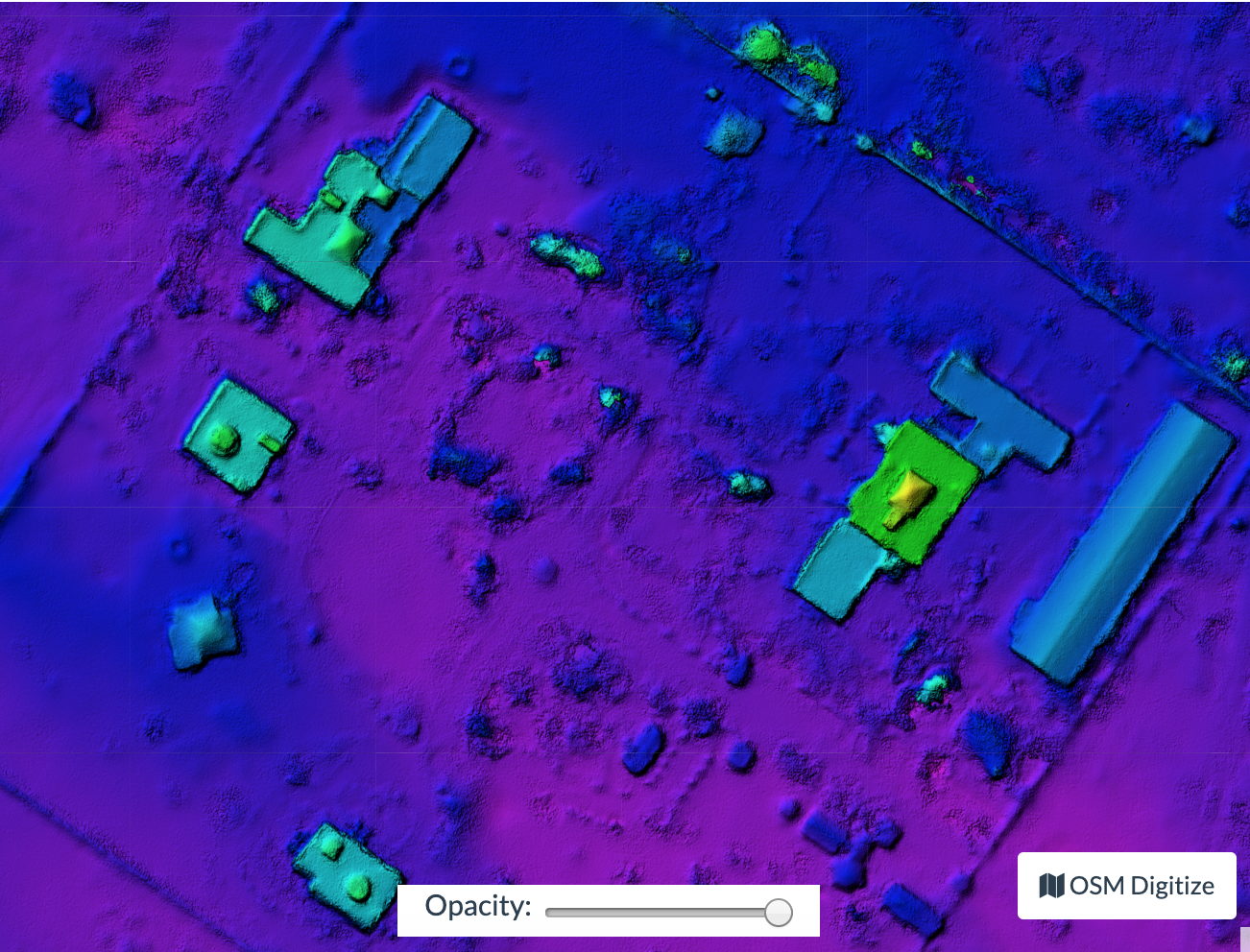 For DTM generation, a Simple Morphological Filter (smrf) is used to classify points in ground vs. non-ground and only the ground points are used. The smrf filter can be controlled via several parameters:

Changing these options can affect the result of DTMs significantly. The best source to read to understand how the parameters affect the output is to read the original paper An improved simple morphological filter for the terrain classification of airborne LIDAR data (PDF freely available).

Overall the --smrf-threshold option has the biggest impact on results.

SMRF is good at avoiding Type I errors (small number of ground points mistakenly classified as non-ground) but only “acceptable” at avoiding Type II errors (large number non-ground points mistakenly classified as ground). This needs to be taken in consideration when generating DTMs that are meant to be used visually, since objects mistaken for ground look like artifacts in the final DTM. 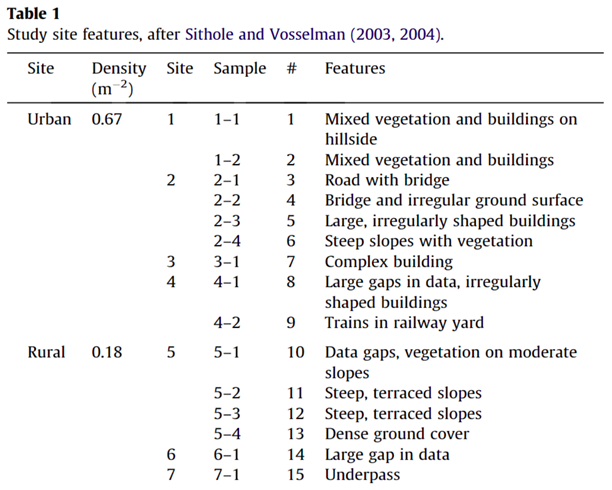 Example of how to generate a DTM:

Weather conditions modify illumination and thus impact the photography results. Best results are obtained with evenly overcast or clear skies. Also look for low wind speeds that allow the camera to remain stable during the data collection process. In order to avoid shadows which on one side of the stockpile can obstruct feature detection and lessen the number of resulting points, always prefer the flights during the midday, when the sun is at the nadir so everything is consistently illuminated. Also ensure that your naked eye horizontal visibility distance is congruent with the planned flight distances for the specific project, so image quality is not adversely impacted by dust, fog, smoke, volcanic ash or pollution.

Most stockpile measurement jobs does not require a crosshatch pattern or angled gimbal as the resting angle of stockpile materials allows the camera to capture the entire stockpile sides. Only some special cases where erosion or machinery operations causes steep angles on the faces of the stockpile would benefit of the crosshatch flight pattern and angled camera gimbal but consider that these additional recognized features come at a cost, (in field labor and processing time) and the resulting improvements are sometimes negligible.

In most of the cases a lawn mower flight pattern is capable of producing highly accurate stockpile models. 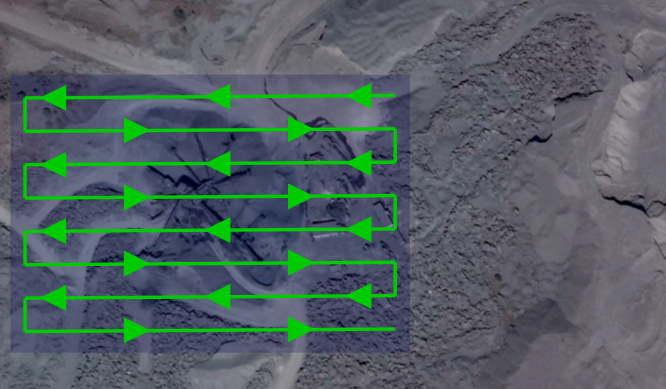 Recommended overlap would be between 75% and 80% with a sidelap in the order of 65% to 70%. It is also recommended to slightly increase overlap and sidelap as the flight height is increased.

Flight height can be influenced by different camera models, but in a general way and in order to ensure a balance between image quality and flight optimization, it is recommended to be executed at heights 3 to 4 times the tallest stockpile height. So for a 10 meter stockpile, images can be captured at a height of 40 meters. As the flight height is increased, it is also recommended to increase overlap, so for a 40 meter height flight you can set a 65% sidelap and 75% overlap, but for a planned height of 80 meters a 70% sidelap and 80% overlap allowing features to be recognized and properly processed.

To achieve accuracy levels better than 3%, the use of GCP’s is advised. Typically 5 distributed GCP are sufficient to ensure accurate results. When placing or measuring GCP, equipment accuracy should be greater than the GSD. Survey grade GNSS and total stations are intended to provide the required millimetric accuracy.

For further information on the use of GCPs, please refer to the Ground Control Points section.

A highly accurate model can be achieved using WebODM high resolution predefined settings. Then you can further adjust some parameters as necessary.

If using ODM, these this reference values can help you configure the process settings.

As almost 50% of the material will be found in the first 20% of the stockpile height, special care should be taken in adequately defining the base plane. 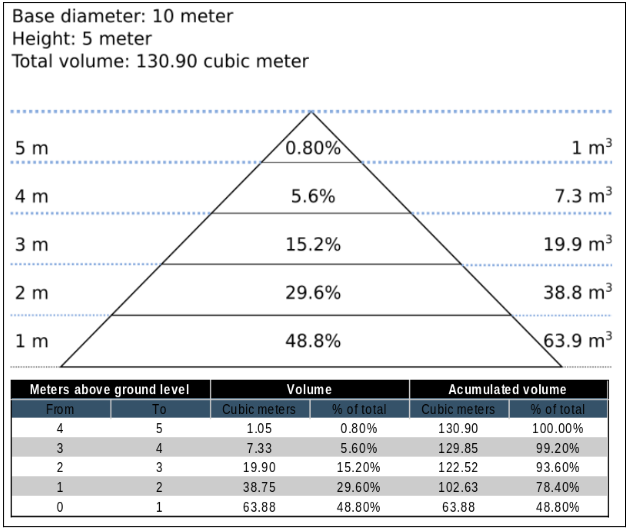 In WebODM Dashboard, clic on “view map” to start a 2D view of your project.

Once in the 2D map view, clic on the “Measure volume, area and length” button. 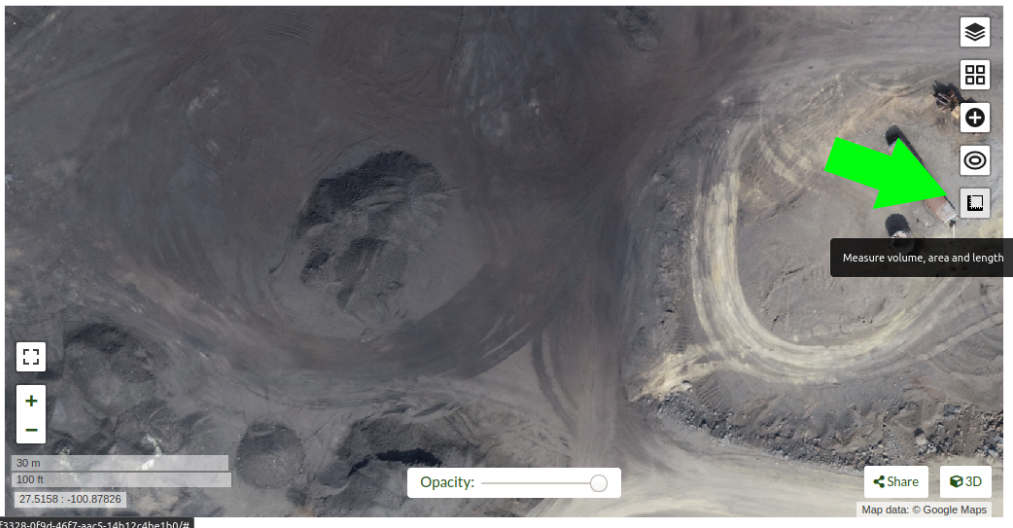 then clic on “Create a new measurement” 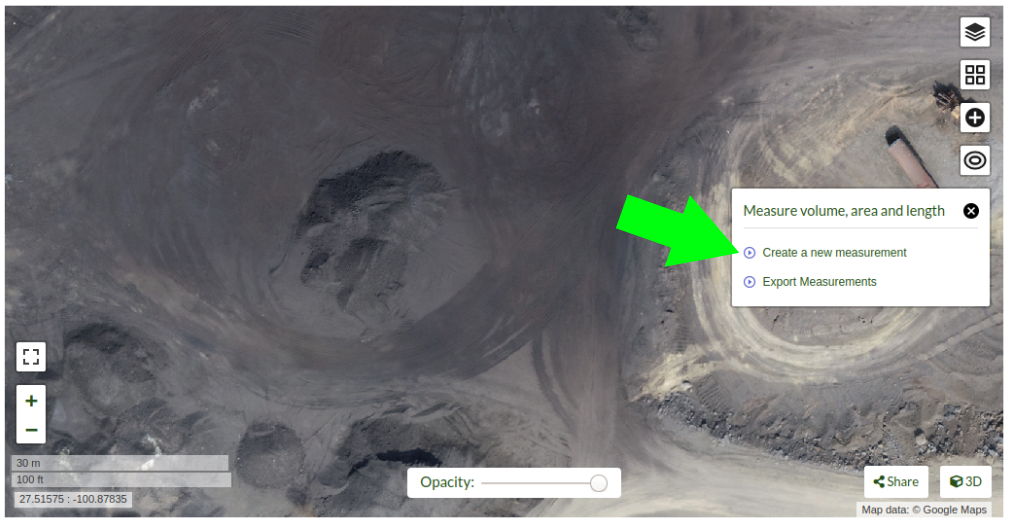 Start placing the points to define the stockpile base plane 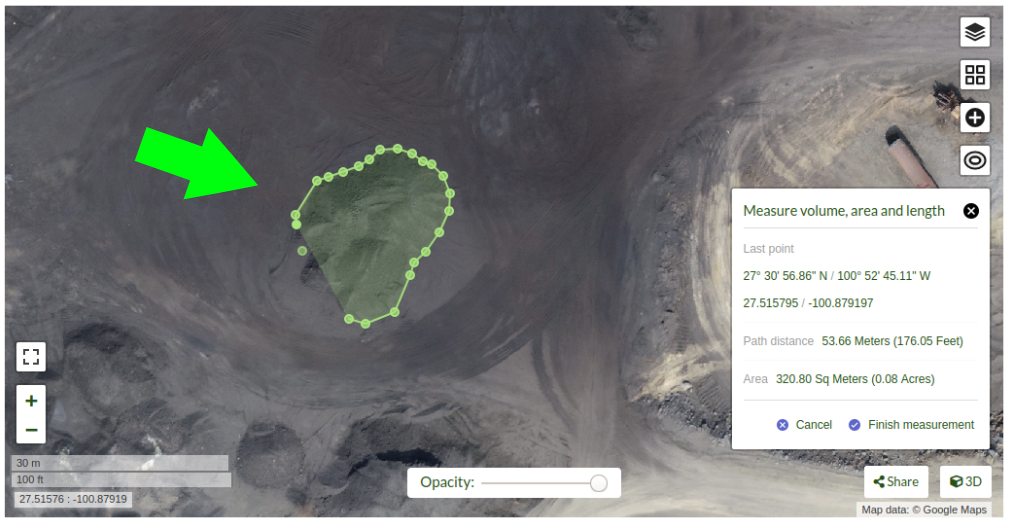 Clic on “Finish measurement” to finish the process. 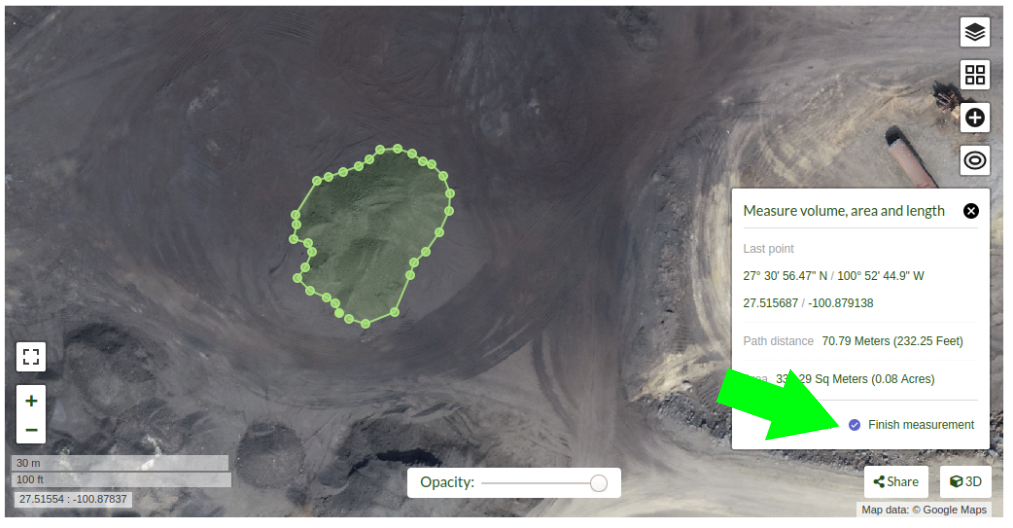 Dialog box will show the message “Computing …” for a few seconds, and after the computing is finished the volume measurement value will be displayed. 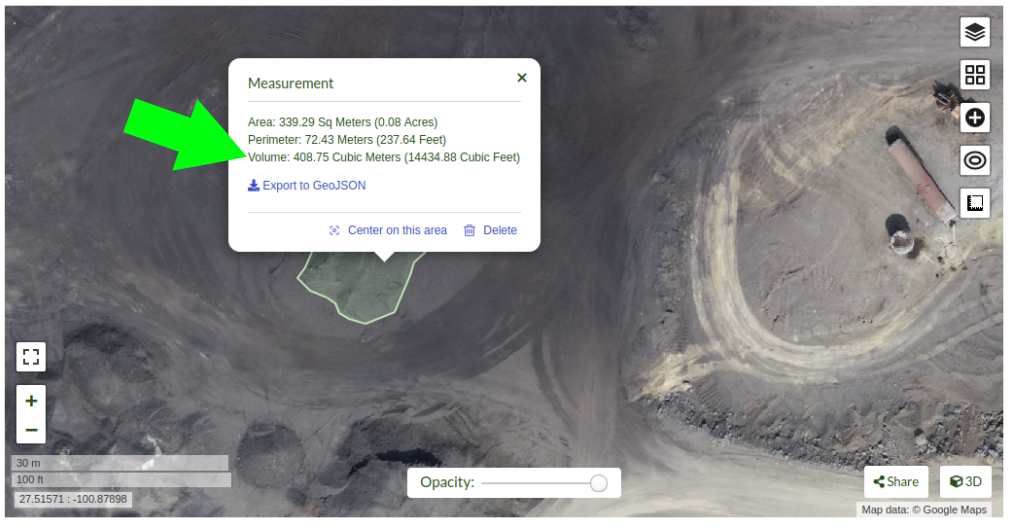 If you are using the command line OpenDroneMap you can use the dsm files to measure the stockpile volumes using other programs.

For carefully planned and executed projects, and specially when GSD is less than 1 cm, the expected accuracy should be in the range of 1% to 2%. The resulting accuracy is comparable to the commercially available photogrammetry software and the obtained using survey grade GNSS equipment.

Since many users employ docker to deploy OpenDroneMap, it can be useful to understand some basic commands in order to interrogate the docker instances when things go wrong, or we are curious about what is happening. Docker is a containerized environment intended, among other things, to make it easier to deploy software independent of the local environment. In this way, it is similar to virtual machines.

A few simple commands can make our docker experience much better.

We can start by listing available docker machines on the current machine we are running as follows:

If we want to see machines that may not be running but still exist, we can add the -a flag:

Accessing logs on the instance¶

Using either the CONTAINER ID or the name, we can access any logs available on the machine as follows:

This is likely to be unwieldy large, but we can use a pipe | character and other tools to extract just what we need from the logs. For example we can move through the log slowly using the more command:

Pressing Enter or Space, arrow keys or Page Up or Page Down keys will now help us navigate through the logs. The lower case letter Q will let us escape back to the command line.

We can also extract just the end of the logs using the tail commmand as follows:

The value -5 tells the tail command to give us just the last 5 lines of the logs.

Now we are logged into our docker instance and can explore the machine.

Docker has a lamentable use of space and by default does not clean up excess data and machines when processes are complete. This can be advantageous if we need to access a process that has since terminated, but carries the burden of using increasing amounts of storage over time. Maciej Łebkowski has an excellent overview of how to manage excess disk usage in docker.

What is this and who is it for?¶

OpenDroneMap can’t always be effectively set up locally—it takes a fairly powerful machine to process large datasets—so a cloud machine can sometimes be the answer for people in the field. However, bandwidth is a problem in many low-income settings. This constraint can’t be solved completely, but the following method does a reasonable job of reducing the bandwidth needed to process drone imagery datasets on the cloud from African locations.

Here we present a tricky but workable process to create an OpenDroneMap cloud machine (not CloudODM, mind you, just a cloud-based instance of ODM that you run from the command line) and use it to remotely process large photo sets. It requires familiarity with Unix command line use, ssh, a Digital Ocean account (Amazon AWS would work as well, possibly with slight differences in the setup), and a moderate level of general computer literacy. If you aren’t fairly computer-savvy and willing to fuss with a slightly tricky setup, CloudODM is what you should be looking at.

The whole process is mostly targeted at someone flying substantial missions in an African or similar location looking to process data ASAP while still in a field setting. Therefore it emphasizes a workflow intended to reduce bandwidth/data transfer, rather than just the simplest way of running ODM.

ODM requires the directories on the machine to be set up just so. The critical bits are the install folder (if you installed as above, it’s /home/odm/ODM/) and the project folder (i.e. /mnt/odmdata/myproject/)

After it finishes (assuming you survive that long)¶